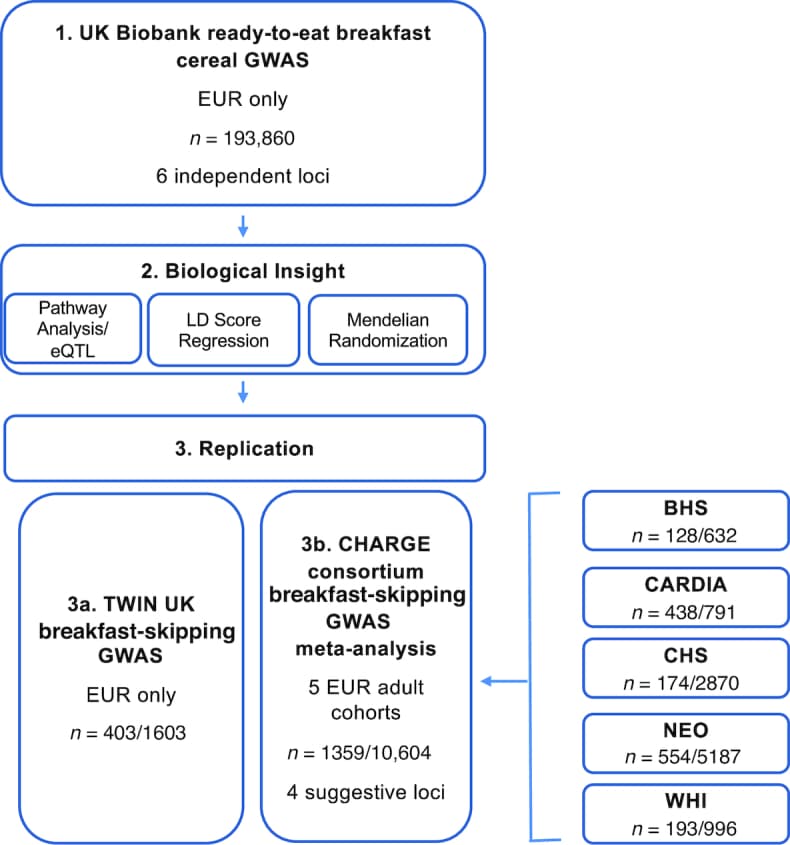 Background: Little is known about the contribution of genetic variation to food timing, and breakfast has been determined to exhibit the most heritable meal timing. As breakfast timing and skipping are not routinely measured in large cohort studies, alternative approaches include analyses of correlated traits.

Objectives: The aim of this study was to elucidate breakfast skipping genetic variants through a proxy-phenotype genome-wide association study (GWAS) for breakfast cereal skipping, a commonly assessed correlated trait.

Methods: We leveraged the statistical power of the UK Biobank (n = 193,860) to identify genetic variants related to breakfast cereal skipping as a proxy-phenotype for breakfast skipping and applied several in silico approaches to investigate mechanistic functions and links to traits/diseases. Next, we attempted validation of our approach in smaller breakfast skipping GWAS from the TwinUK (n = 2,006) and the Cohorts for Heart and Aging Research in Genomic Epidemiology (CHARGE) consortium (n = 11,963).

Results: In the UK Biobank, we identified 6 independent GWAS variants, including those implicated for caffeine (ARID3B/CYP1A1), carbohydrate metabolism (FGF21), schizophrenia (ZNF804A), and encoding enzymes important for N6-methyladenosine RNA transmethylation (METTL4, YWHAB, and YTHDF3), which regulates the pace of the circadian clock. Expression of identified genes was enriched in the cerebellum. Genome-wide correlation analyses indicated positive correlations with anthropometric traits. Through Mendelian randomization (MR), we observed causal links between genetically determined breakfast skipping and higher body mass index, more depressive symptoms, and smoking. In bidirectional MR, we demonstrated a causal link between being an evening person and skipping breakfast, but not vice versa. We observed association of our signals in an independent breakfast skipping GWAS in another British cohort (P = 0.032), TwinUK, but not in a meta-analysis of non-British cohorts from the CHARGE consortium (P = 0.095).