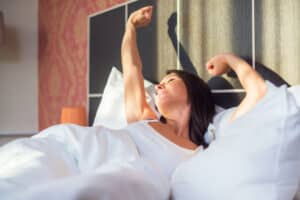 Morning or night person? It depends on many more genes than we thought

Originally appeared in The Conversation, January 29, 2019.

Do you prefer to rise early with the lark or stay up late with the owl? Your preference turns out to be partly decided by your genes. Our genetic study of nearly 700,000 people has revealed new insights about the genetics of chronotype – our preference to rise early or sleep late – and how it influences our mental and physical health.

We all lie somewhere on the chronotype bell-curve, with larks (early sleepers) at one end and owls (late sleepers) at the other. Our chronotype is partly influenced by our environment. Factors include season, latitude and whether we live in an urban area. Men are more likely than women to be owls and we become more lark-like as we age. However, studies have shown that anywhere between a fifth and a half of our chronotype is fixed at birth by our genes. Until as recently as 2016, little was known about what these genetic factors were.

With data on 250,000 people from 23andMe and 450,000 people from the UK Biobank, we analysed their genes against whether they were “morning” or “evening” people. We found 351 genetic variants that contribute to determining a person’s chronotype. Before this study, we knew of only 24.

Research has shown that owls have an increased risk of obesity, depression and even type 2 diabetes. Our newly found chronotype variants allowed us to investigate whether sleeping and rising later are directly responsible for this.

How our genes affect our body clock

Some genetic variants we identified were in or near genes responsible for the correct functioning of the body clock. This suggests that some differences between larks and owls can be ascribed to slight differences in the clock itself. It may explain previous findings that owls have clocks that run slower than larks.

Although the body clock can operate without external interference, in humans it tends to run for slightly longer than the 24-hour day. To stay in sync with the day-night cycle, it receives cues from the environment via the body, from sensed levels of temperature and light. These allow the clock to be “entrained” (corrected) each day.

Some of the genetic variants we found were in genes that are important in the retina, part of the eye that converts light focused by the eyeball to signals for communication to the brain. In an experiment investigating the effect of night-time artificial light on humans, researchers showed that the body clocks of owls were delayed more than larks. This may suggest that the retinas of owls are less effective at detecting and communicating light levels, resulting in poorer entrainment of the clock.

Many other variants we identified have already been seen in genetic studies of other traits or disorders. These include variants that affect your levels of insulin, your appetite and the rate at which your liver breaks down nicotine – a known stimulant. More work is needed to understand whether these variants act through affecting the body clock or via different behavioural mechanisms.

Sleeping later and your mental health

Uncovering the genetics of chronotype provides us with tools to investigate the causal impact of rising early or late on someone’s risk of disease, without being plagued by the effects of shared factors such as lifestyle and environment.

We were able to show that being an owl, as opposed to a lark, causes you to have lower levels of well-being and means you are more likely to suffer from schizophrenia and depression over your life. One possible explanation for this is the higher amount of social jetlag suffered by owls. To conform to standard work patterns, owls may be forced to fight against their body clocks more than larks and compensate on free (non-work) days by sleeping later. Fighting your natural clock is believed to make you more prone to disease, though more research is needed to understand why this is the case.

But it’s not all bad news for the owls. Although previous studies showed a link between owls and a higher risk of type 2 diabetes and obesity, we saw no causal evidence of this, despite having data on close to 700,000 people. Lifestyle factors affecting both your chronotype and your risk of obesity and diabetes probably explains this lack of a causal link. In future studies, we will test this hypothesis and seek stronger evidence for these findings.

In two forthcoming parallel studies, we describe the genetics of habitual sleep duration and insomnia. These studies mark the start of an exciting new wave of research in sleep medicine.